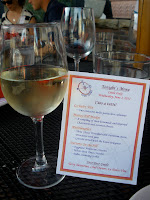 When Amanda from Clue into Cleveland reached out to me a few weeks ago about going on the next NEO Food Tour through Little Italy, I wasted no time getting a ticket.  Little Italy is one of my favorite neighborhoods in Cleveland and the opportunity to eat at four different places in one visit was not one to turn down.  Little Italy has a certain charm about it that draws both Italian and non-Italian Clevelanders back again and again.  From cute little art galleries to the history and tradition to of course the FOOD I cannot say enough good things about Little Italy.  Our walking tour through Little Italy was the perfect way to learn about this historic neighborhood with four different food stops along the way. 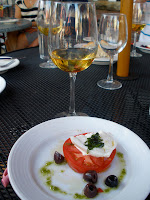 Our evening began on the corner of Murray Hill and Mayfield at one of my personal favorites La Dolce Vita.  La Dolce's owner, Terry Tarintino, would be our guide to the night.  Once our group assembled, we were seated on the back patio to enjoy "una creazione molto particolare culinaria" according to our menu.  We were presented with a beautiful caprese accompanied by a pour of La Lave, a white Terry discovered while in Key West.  I love a nice caprese to start a multi-course Italian meal.  The combination of the freshness of the ingredients, the unique and refreshing wine, and the warm weather set the tone for a great evening.  The slightly sweet tomato and the creamy mozzarella blended nicely together while the basil and olive oil added a nice flavor.  While enjoying this creation, Terry gave us a little history of the building.  Originally, La Dolce Vita was the neighborhood pharmacy.  Now it reminds me of what I would picture to be a small bistro on the Italian countryside (I have never been to Italy, so I would not know). 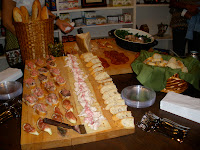 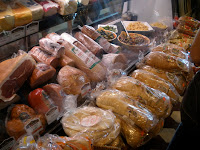 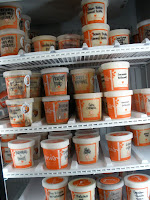 Our next stop was slightly uphill (Murray Hill) to the newly opened Murray Hill Market.  We were greeted by owner Michele Iacobelli-Buckholtz who told us she opened the market after her child went off to school at NYU.  She was impressed with all of the small family owned markets in Greenwich Village and wanted to bring that home to Cleveland.  The shelves are stocked with the usual market fair intertwined with specialty and imported items.  Murray Hill Market also offers a deli counter and fresh local produce.  Here, Michele prepared for us a wonderful spread of cured meats, fresh parmigiano-reggiano cheese, prosciutto wrapped figs (my personal favorite at this stop), and turkey on pepper jack drizzled with cranberry mayonnaise.  Upon exploring the store further, I found another delicious surprise, Murray Hill Market sells every variety of Jeni's Ice Cream.  Between the deli counter, the fresh daily specials, and Jeni's,  I know I will be back very soon to the market. 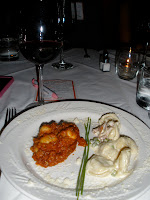 While walking to our next stop, Terry told us when he was growing up in Little Italy, family owned markets were everywhere throughout the neighborhood.  Many of the houses were built over a small storefront.  He pointed out where his uncle's hardware store used to he (Now Il Bacio), and where his grandfather lived (and had a dice game) all along the way to Michaelangelo's for our entree course.  Upon entering, Terry mentioned it used to be a privet club and has the most unique urban patio in the neighborhood.  Waiting for us was a large table in the dining room off of the bar.  Sitting down, I felt as if I were a guest at a family dinner hosted by Italian friends.  We were served a three cheese tortellini with parmasan, and prosciutto with peas.  I would hope this dish is on the menu next time I visit Michalangelo's.  The tortellini was cooked to perfection and the parmasan pulled the proscuitto and peas into the pasta component.  Also, we were served a gnocchi in the house Bolognse.  I would recommend the gnocchi for a future visit.  They were not overly chewy or heavy like some gnocchi tend to be.  However, the house Bolognese had both duck and veal in it.  I would have much rather preferred a simple marinara (which was served to the vegetarians in our group) since I do not like veal.  I sampled a little bit and it was just not working.  For those who enjoy veal, try the house Bolognse at Michaelangelo's and let me know your thoughts! 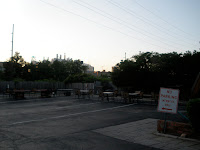 Before heading back downhill for our dessert, Terry showed us this unique patio complete with bocci ball courts.  It has a beautiful view of the RTA tracks, the Case Western campus, and University Hospital.  Along the walk down Murray Hill, Terry would smile and wave at the neighbors while saying a friendly "hello".  This really gave me a wonderful impression of the sense of family and community in Little Italy.  Some of the places and faces may have changed over the years, but the warmth of neighbors and tradition are still strongly felt.  Our final stop was another of my Little Italy favorites, Trattoria on the Hill.  After being lead to the back patio, we were served two different crustinis, one eggplant and the other white bean and tuna, we cleansed our palates and satisfied out sweet tooth with raspberry and lemon sorbets.  Upon leaving with full stomachs, we were given two mini cannoli from Corbo's.  These may or may not have made it to my car.  Afterall, for me, a meal in Little Italy is not complete without a cannoli. 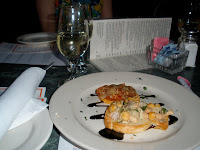 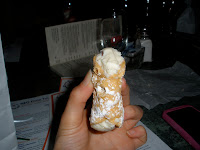 NEO Food Tours have many exciting culinary adventures planned throughout the summer.  Their next neighborhood food tour will be on June 22 in Tremont (my other favorite food neighborhood).  Tickets will go fast and are quite limited.  Pat Johnson and Todd Gauman are hoping their tours and expeditions will develop a relationship between the community and the food.  They hit a home run with Terry Tarintino as our guide through Little Italy.  I could listen to him tell stories and the history of the neighborhood all day, maybe on the patio with a glass of wine and cannoli.  You really could sense his love and pride for his neighborhood and the food we all know and love. 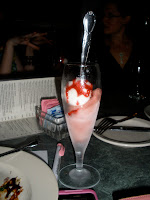 Until next time...follow your heart, fulfill your hunger!
Posted by Unknown at 4:10 PM 4 comments: Links to this post

Promote Your Page Too

Past treats and libations